Dr. Charles Hubbard, executive director of the Abraham Lincoln Institute for the Study of Leadership and Public Policy, spoke to the Tri-Cities Civil War Roundtable on Monday, September 12. Hubbard’s presentation dealt with the relationships between Lincoln and his generals during the fall of 1861.

Lincoln appointed politically influential individuals to positions of command in an effort to secure the support of different constituencies, but some of these appointees proved unwilling to implement presidential directives or poorly suited to the task of leading armies.

One of the most troublesome generals during this relatively obscure period of the war was John C. Fremont, a prominent explorer and politician of the antebellum years.  As commander of the Department of the West, Fremont instituted martial law in the border state of Missouri and declared that state’s slaves free.  Lincoln had not yet implemented his own emancipation policy, and he feared this rash move would alienate the border state citizens, whose support he badly needed.  He ultimately rescinded Fremont’s emancipation order and removed him from command of the department.  A year later, Lincoln announced an emancipation policy of his own. 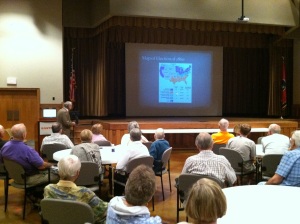